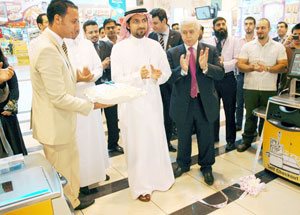 The Bindawood Group, one of the largest retailers in the Kingdom of Saudi Arabia, operates a chain of supermarkets and hypermarkets under its Bindawood and Danube brands. The Bindawood Group’s goal is to provide shoppers with a wide variety of quality products at competitive prices. The group operates more than 30 stores located throughout the Kingdom of Saudi Arabia, including the cities of Makkah, Jeddah, Riyadh, Khobar and Madina al Munawara.

As the Bindawood Group’s customer base continued to grow, the Saudi retail giant recognized that its digitally enabled shoppers fully expected retailers to meet their need for technology that would support independent, convenient and speedy in-store transactions. The Bindawood Group realized it could benefit from the deployment of a technology solution that would streamline and enhance the customer’s shopping experience. Seeing an opportunity to further build customer loyalty and differentiate itself from competitors, the Bindawood Group opted to become the first retailer in Saudi Arabia and the Arab World to deploy self-checkout technology.